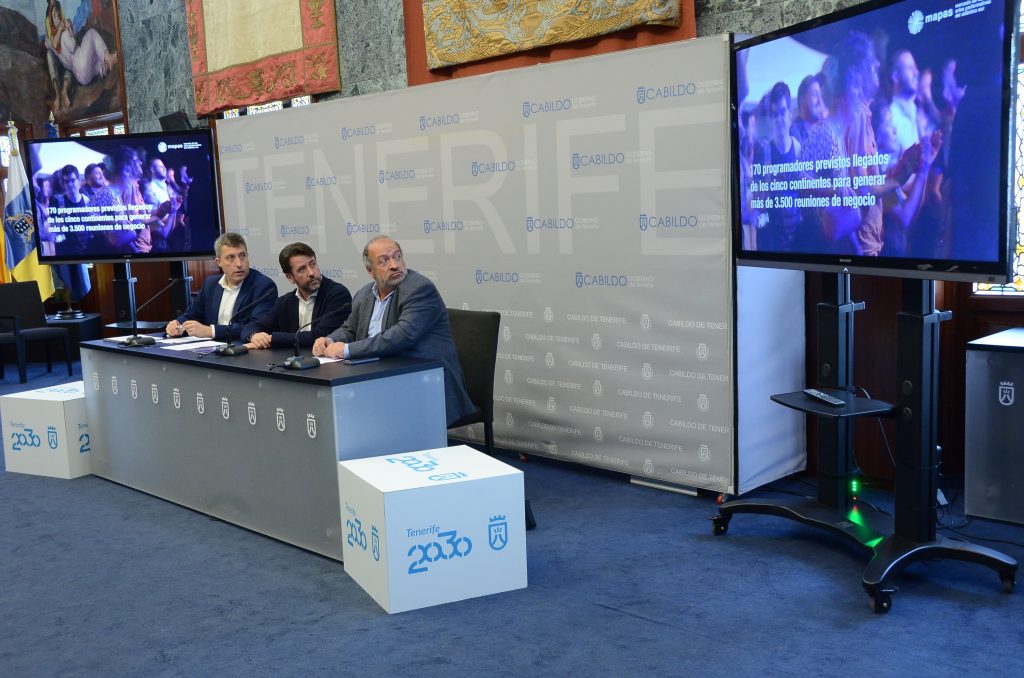 The South Atlantic Performative Arts Market, MAPS 2019, has concluded the registration process for artistic groups and agencies with 874 proposals from 74 countries. Now the selection period begins, which will determine which of these artistic projects will participate in the third edition of the Market that will be held in Santa Cruz de Tenerife from July 10 to 14, organized by the Cabildo de Tenerife, unahoramenos and Circulart.

The details of this new edition were announced today [Monday 18] by the president of the Cabildo, Carlos Alonso; the insular director of Culture, José Luis Rivero, and the director of Circulart, Octavio Arbeláez.

For Carlos Alonso, “Africa is more present than ever in MAPAS”, As evidenced by the fact that 136 groups from 35 countries have registered for this third edition, which far exceeds the 90 registered from 18 countries last year. The president of the Cabildo considers that “Canarian production has in MAPAS its lever and its springboard for its development beyond the public of the Islands ”, which also find a reinforcement with the offer of aid and training.

José Luis Rivero recognizes that “the intention of MAPAS it is threefold: generation of artistic projects, in the 2018 edition there were more than 16,000 spectators; training, that is, a market is being formed and also to be formed, which in MAPAS has a correlation with previous workshops and keynote conferences; and a third, fundamental leg, that of the market, which is not for buying and selling, it is relational, for the exchange of ideas that are transformed into business and monetized ”.

For his part, Octavio Arbeláez is "happy and satisfied to present the consolidation of a project that is already a leader in Latin America and that is making its way into Africa."

The consolidation of MAPAS As an international meeting point for the performing arts and music in its two previous editions, it has increased the interest of artists, agencies and programmers from all over the world to participate in this market that combines business meetings with performances and artistic exhibitions open to the public. public. The increase in the African presence is one of the most outstanding elements in the closing of the proposals. Senegal, Morocco, Cameroon, Mozambique, Tunisia and Benin are the African countries from which more requests have come for this third edition.

From Latin America, 351 registrations from 18 countries have been counted, with a significant number of applications from Colombia, Mexico and Chile. The artists from Spain add up to 274 proposals, of which 110 are from the Canary Islands, and 9 are from Portugal. MAPAS has also registered a total of 43 applications from 13 other European countries, including France, Italy, Slovenia, Finland and the United Kingdom.

Interest in this market for the performing arts has also reached North America, from where 11 artistic groups have registered (Canada and the United States), and other countries such as India, Israel, Lebanon and Turkey.

The data by disciplines show a majority presence of musical groups, with 490 applications, while the registrations of performing arts add up to 338. Of these, 177 are theater; 120 are dedicated to dance; 23 are from the circus; and 18 of street arts.

Regarding the booking, management and distribution agencies that, for the first time, will have a presence in MAPS, a total of 46 have formalized their registration, coming from 14 countries.

All these proposals will go through the selection process, which will be carried out by a jury made up of renowned professionals, to choose the 200 artists, companies and agencies that will participate in the business roundtable. Among all of them they will select the 60 that will have the opportunity to perform before the public and the programmers in the artistic exhibitions that are going to be organized and that this year will incorporate a new outdoor stage, in the Alisios square. TEA Tenerife Espacio de las Artes, Tenerife Auditorium, Guimerá Theater, La Granja Theater and Museum of Nature and Archeology are already confirmed as spaces for performances.

The registration of programmers to participate in the Market is still open and the first registration data points to an increase in participation in relation to the last edition, in which 143 program managers and cultural managers from all over the world met in Tenerife with 164 artists and companies to hold more than 3,500 work meetings. The results of the selection process of artists and agencies to participate in the business roundtable and in the artistic exhibitions will be made public as of March 29.

The organization of MAPAS It is already working on the configuration of the program for this third edition, which, thanks to the experience acquired, will broadly include the interests of artists, companies and programmers and will offer diverse and high-quality content. Among them, and focusing on the objective that Tenerife consolidate itself as a platform for international connections for the performing arts, the Network Meeting stands out, which will bring together representatives of institutions that promote music and the performing arts around the world on the island. , with the participation of the Association for the Development of the Ibero-American Music Industry (ADIMI), Global Music Market Network (GLOMNET), the Euro-Latin American Network of Performing Arts (REDELAE) or the Network of Theaters and Auditoriums of Spain (REDESCENA) .

The inaugural show of MAPS 2019 will be in charge of Wash, the resident dance company of Auditorio de Tenerife, which will present its next production to open this third edition of the great event for the performing arts and music. The opening party will feature the performance of several dance orchestras, one for each continent represented in MAPAS, from among those selected to participate in the artistic exhibitions.

The director of the National Institute of Fine Arts of Mexico, Lucina jimenez, will deliver the inaugural conference of MAPAS 2019, in which he will speak about How to Work Together. Networking. Lucina Jiménez, PhD in Anthropological Sciences, is a specialist in cultural policies and sustainable development, education in the arts, cultural rights and culture of peace, and has a long history and recognition in international cooperation networks linked to cultural rights and policies. cultural

The organization of the Market is preparing other conferences and training activities and the exchange of experiences and knowledge that, together with the artistic exhibitions and business meetings, will bring together thousands of people including artists, companies, musicians, agency representatives, programming managers and public.

The international interest in this third edition of the South Atlantic Performative Arts Market, which is reflected above all in online channels and social media, where significant growth in the numbers of users from various countries and intense interaction are being recorded. The website of MAPAS It has counted just over 27,000 visits in the last two and a half months, from December to today. On Facebook there are 7,185 followers of MAPAS, 56% more than a year ago; on Twitter, 1,879 (+ 243%) and on Instagram, 6,094 (+ 863%).

MAPAS continues to advance in its third edition in the objective of promoting business culture for the live arts, making available to artists, agencies and programmers a space for the sale and purchase market, emblematic stages of Tenerife for artistic exhibitions and a training and analysis offer and debate to favor the development, consolidation and international projection of artistic projects that are generated in Africa, Latin America and Southern Europe.

The South Atlantic Performative Arts Market returns in its third edition to once again turn Tenerife into an international reference for the performing arts and music, occupying the main stages and cultural spaces of the capital in a proposal that combines professional management with artistic exhibition, training and exchange of experiences and knowledge.