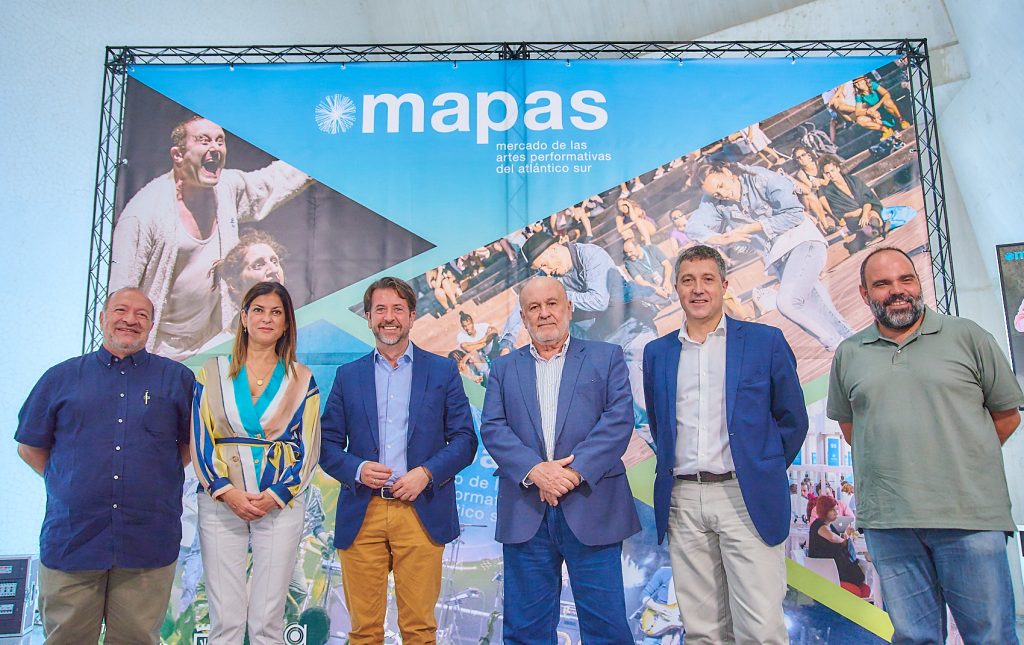 Tenerife will host the third edition of the South Atlantic Performative Arts Market, MAPS 2019, which has become an international benchmark for the performing arts and music that is created in Africa, Latin America and southern Europe and which this year will once again bring together artists and program managers from the five continents.

This festival of culture and live arts was presented today at a press conference by the president of the Cabildo, Carlos Alonso; the insular director of Culture and Education, José Luis Rivero; the acting Vice-Minister of Culture of the Government of the Canary Islands, Aurelio González; the first deputy mayor of Santa Cruz de Tenerife, Matilde Zambudio; the director of Circulart, Octavio Arbeláez; and the director of one hour, Mario Vega.

Alonso highlighted "three things" about MAPAS. On the one hand, "the public, who from the first edition had a great response that has been increasing and that has been a guarantee of continuity for this market due to the heat that they have transmitted to the participants". Second, "which places the production of the islands on the world stage, in an open, global and diverse environment." And finally, he valued the growth achieved, which has allowed representation agencies to be incorporated for the first time this year, "as an important element to give MAPAS even more power", in addition to the increase in the "density of participation from other territories" .

José Luis Rivero stressed in his speech that MAPAS "It has established itself as a platform for the Canarian performing arts in the world and also as a platform for the world's performing arts that takes place in the Canary Islands." "The tricontinental confluence becomes real in Tenerife", he added. He also explained that the return on investment of the last edition of this meeting with the arts was very important with around 5 million euros, with an average of more than 1,000 euros per visitor and 300 euros per resident of the Canary Islands.

The director of an hour, Mario Vega, announced the details of the programming of MAPAS which will take place over five days in various settings in the capital of Tenerife and pointed out that this edition has given special relevance to "sustainability and practices that generate the least environmental impact in the city."

Octavio Arbeláez highlighted that "Tenerife is a privileged meeting place" for the development of MAPAS. A project that "shows the world that we are creating from diversity" and this third edition is "very special", he added, because it delves into networking, strategies for collaborative work.

Matilde Zambudio appreciated that Santa Cruz de Tenerife is “the common thread of MAPAS, whose third edition represents a new opportunity to advance culture towards international markets ”. The acting Deputy Minister of Culture of the Government of the Canary Islands, Aurelio González, stated that "MAPAS is a project that affects creativity" and "motivating meetings are needed to help encourage it."

The figures for MAPAS 2019, organized by the Cabildo de Tenerife, unahoramenos and Circulart are, once again, very positive, with high participation: 138 artistic and musical groups from 27 countries, 30 artistic representation agencies and 149 responsible for programming and cultural managers of 40 nationalities.

This professional market in which business meetings, academic activities, meetings of international institutions and entities and artistic exhibitions open to the public will be held, will occupy the main cultural spaces of the Tenerife capital for five days to deploy a complete program in which the articulation Cooperation networks and joint work will play a prominent role.

The program of performances and showcases can be consulted on the web and in the free app that can be downloaded for mobile phones, IOS and Android, and access all the information of artistic exhibitions and conferences of MAPAS. Through this application, notifications of interest to the public and market participants will also be sent.

The 138 artistic groups and the 30 representation agencies will be able to meet with the almost 150 cultural programmers and managers to find business and distribution opportunities for their artistic proposals and to formalize agreements for future collaborations. The business conference  It will be held at TEA Tenerife Espacio de las Artes on Friday 12 and Saturday 13 July, from 10:00 to 14:00. These short-form, 12-minute meetings will allow artists to showcase their creations to programming managers in 40 countries. In the last edition of MAPAS, around 3,500 professional meetings were held, from which numerous subsequent agreements were derived.

TEA Tenerife Espacio de las Artes, the Tenerife Auditorium and its surroundings, La Granja Espacio de Promoción, the Guimerá Theater, the IES Alcalde Bernabé and the Museum of Nature and Archeology (MUNA) will be the venues where the business conference, conferences, meetings, talks and round tables and artistic exhibitions of theater, dance, circus and music from three continents.

A dance premiere for the opening show

The inaugural show of this third edition will be in charge of Lava, the dance company of Tenerife Auditorium, whose artistic director, Daniel Abreu, has created and directed Abyssal, one piece  of 60 minutes of duration that will premiere on Wednesday, July 10, at 8:00 p.m., in the Symphonic Hall of the Auditorio de Tenerife to start the MAPS 2019.

In this show, the six performers of Abyssal they will give life through dance to a pure and deep geography, of water between sediments and air, of shade, calm, unimaginable fauna, an impossible place to inhabit. Daniel Abreu himself explains in his description of the piece that “love is what moves the world and each of the actions of these six interpreters goes towards it. I cannot watch the dance if it is not loving… In my imagination it takes me to the deep sea blue, to the beautiful creatures and to extensive obsidian sediments or any other volcanic residue ”.

MAPS will honor its Distinguished Cartographer of 2019, a distinction that will be awarded to Hassane Kouyaté (Burkina Faso, 1964), griot, actor, percussionist, stage director and one of the great ambassadors of African culture, who has shown that the distance imposed by the oceans and borders are nothing when it comes to sharing art. He enjoys both a consolidated training and an extensive record that have made possible a long and prestigious career. Kouyaté has been key in the realization of geographic maps of culture. This figure of the live arts has thrilled audiences from Burkina Faso, Ivory Coast, Niger, Mali, Senegal, Togo, Guinea, Congo, Morocco, Algeria, Tunisia, with his shows, works of great social and creative commitment, Venezuela, Mexico, Brazil, Reunion Island, Canada, United States, Switzerland, France, Belgium, Spain, Austria, Germany and Cuba.

The South Atlantic Performative Arts Market It will also have a wide professional and academic agenda in which the conferences of Sylvie Duran, Minister of Culture and Youth of Costa Rica, who will speak about networking, and Daniela Bosé, teacher and professional who will present her vision of the role of women in the music industry. Furthermore, MAPAS will host interesting debates on the advantages of cooperation in the cultural sphere, and on the performance of women in the Ibero-American performing arts.

One of the most outstanding round tables will be the Cock Debate, a meeting that will star the artists and social activists Serge Smockey Bambara and Henry Arteaga, known as The Jke, and that will be moderated by the journalist Nicolás Castellano. Both will also participate in the program MAPS 2019, with performances on Saturday, July 13. Bambara is a member of Smockey & The Agama Band, a Burkina Faso Afro rap band with politically and socially committed lyrics. He is also one of the creators of the social movement citizen broom, who was committed to the fall of the regime of dictator Blaise Compaore. Henry Arteaga The Jke is part of the Colombians Dangerous Crew, an artistic proposal that has generated a loyal audience for their professional way of facing the scenarios. They are also recognized for their proposals for social construction from art.

For his part, the insular director of Culture of the Cabildo de Tenerife, José Luis Rivero, will present the model of Tenerife in performing arts and music, as well as the challenges and opportunities for companies. His will be one of the eight talks offered during the market with topics of interest to artists, program managers and cultural managers.

MAPAS It is consolidated in its third edition as a great international reference forum for the cultural and creative industries and an international meeting point for the live arts. In this context, the Network Meeting, which will bring together in Tenerife representatives of institutions and organizations that promote music and the performing arts around the world.

From the analysis and professional and rigorous debate, associations and organizations that comprise the business fabric of the live arts around the world - such as the Association for the Development of the Ibero-American Music Industry (ADIMI), Global Music Market Network ( GLOMNET), the Ibero-American General Secretariat (SEGIB), the Euro-Latin American Network of Performing Arts (REDELAE) or the Network of Theaters and Auditoriums of Spain (REDESCENA) or Satellite Lat Women of the Latin American Music Industry, among others - will participate in the Meeting of Networks to work in favor of the strengthening of culture, the internationalization of artistic proposals and the solidity of creative industries through proposals based on innovation and consensus.

Within this framework of deepening collaborative work networks, MAPAS will also have an assembly of the Euro-Latin American Network of Performing Arts (REDELAE). The Canary Islands will be represented by the Association of Performing Arts Companies of the Canary Islands Réplica and Pie de base, the association of artists from the Canary Islands movement. Both organizations will take advantage of the scenario offered by MAPAS to hold their respective member assemblies and build collaboration networks with those agents interested in joining them.