MAPAS bursts into Tenerife with 164 artistic groups, 143 programmers from around the world and 56 live performances 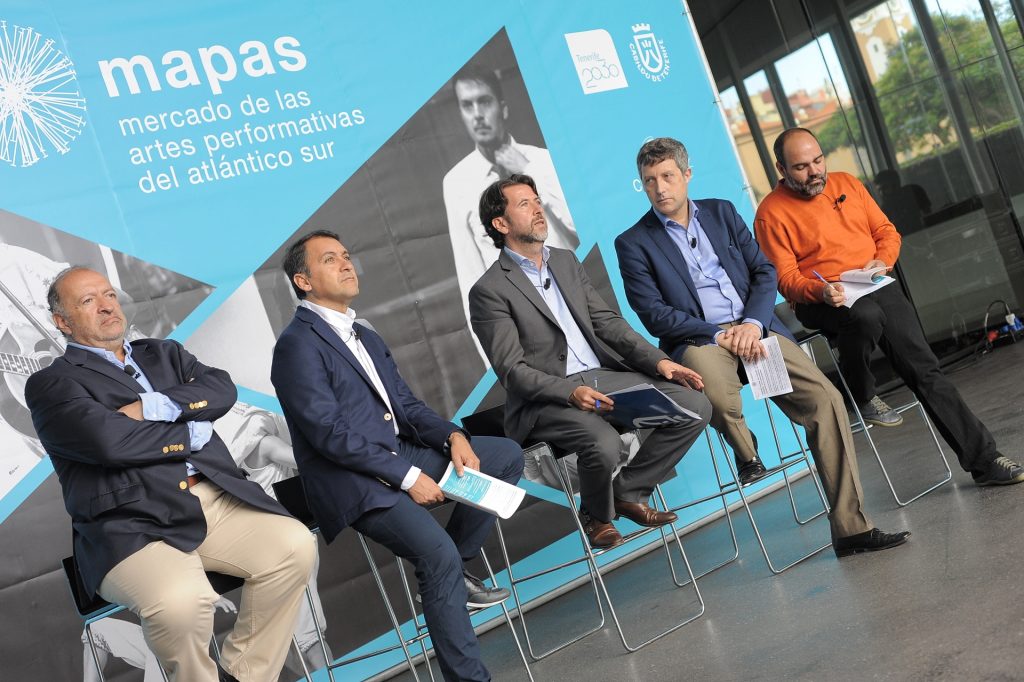 The second edition of MAPAS, Market of Performative Arts of the South Atlantic, demolishes national borders with a cultural proposal that from July 11 to 15 it will break into Santa Cruz with 56 free performances open to the public, 164 music and performing arts groups from Latin America, Africa and Southern Europe (Spain and Portugal) and 143 programmers from 40 countries. The details of this meeting were announced today [Thursday 28] by the president of the Cabildo, Carlos Alonso; the insular director of Culture, José Luis Rivero; the mayor of Santa Cruz, José Manuel Bermúdez, and the artistic and production directors of MAPAS, Octavio Arbeláez and Mario Vega, respectively.

The meeting, organized by the Cabildo de Tenerife, unahoramenos and Circulart, will once again turn the Island into focus of internationalization of the live arts. The Auditorio de Tenerife, TEA Tenerife Espacio de las Artes, the Museum of Nature and Man, the Guimerá Theater, Sala La Granja Theater and spaces on the street near these stages will host a complete program that will make MAPAS a great celebration of the live arts.

Carlos Alonso He highlighted "the consolidation of MAPAS as a very important international market for production in which Canarian creations play a leading role, both due to their number and quality". He also pointed out that in this second edition the Tenerife artists who participate in the MAPAS business roundtables They have a support from the Cabildo to facilitate their exit abroad, at the same time that he reported that in the next plenary session of the Island Corporation the Government of Spain will be asked to recover the aid of one million euros that was available to support the displacement of Canarian works and artists.

Jose Luis Rivero He stated that, after the success of the first edition, MAPAS 2018 "is a solid project from Tenerife to the world" and stressed that the participation figures "have broken all records from last year". The insular head of Culture indicated that "the meeting provides a clear benefit for the sector, which helps it to generate economic and professional activity."

Jose Manuel Bermudez He wanted to highlight that a show like MAPAS is held in Santa Cruz and that it does so in five first-rate cultural venues. He highlighted the programming of 56 free shows as a way to democratize culture. 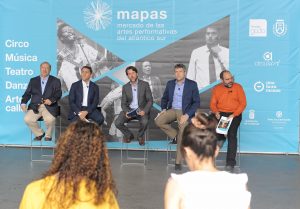 Octavio Arbeláez He pointed out that "MAPAS was already a more robust baby than we thought in the first edition" and now it acquires dimensions that allow us to enter the big leagues of international platforms ". Within MAPAS 2018, the director of Circulart highlighted the meeting of Ibero-American markets, which comes to the island under the umbrella of the Ibero-American General Secretariat (Segib) and which will bring together almost thirty representatives from different countries.

Mario vega He offered the main details of the programming and advanced that two of the five shows highlighted by the International Critics Association will be able to be seen during the MAPAS. For this reason, he pointed out that "the market as such is very important but the artistic programming is outrageous."

Likewise, Benito Cabrera unveiled his show Canary Islands: came to the world, a MAPAS production that will serve to inaugurate this 2018 edition and that will take place next Wednesday, the 11th, at 9:30 p.m., in the Tenerife Auditorium.

The professional sale of performing arts and music generated in the South Atlantic It is the starting point of this cultural event, which seeks to promote international collaboration and exchange while strengthening the creative industries. MAPAS has its main lines of development in business meetings, the exhibition of live shows, training and international meetings.

A total of 164 creators of the performing arts and music from 29 countries will have the opportunity to generate business opportunities, professional meetings, distribution and marketing agreements with more than 140 programmers of theaters, cultural spaces, festivals and other events based in 40 countries around the world. The connection between artists and managers is essential for the development of the sector, with which parallel to the business conference –Organized in 12-minute appointments– a network of restaurants and establishments in the city is offered, under the heading of 'MAPAS restaurants':, where to continue with the exchange in a less formal manner.

During the five days of the market, citizens and visitors will be able to get free of charge from the talent that will be shown in the 56 shows from 16 countries that have been programmed. Of the total number of artistic samples, 29 will be performing arts (theater, dance, circus and street arts), from Africa, Latin America, Portugal, the Canary Islands and other Spanish communities. The musical section will feature the live exhibition of 27 different projects from Africa, Latin America, the Canary Islands and other Spanish communities.

MAPAS It is also conceived as a platform for international meetings, taking advantage of Tenerife's geographical location and its links with the African and Latin American continents. For this reason, a complete program of activities has been designed that will promote collaboration, learning and the exchange of knowledge and experiences. George Yúdice, a world reference in the field of cultural management and policies, will deliver the inaugural MAPAS conference: Cultural industries in Latin America and their relationship with the new cultural markets.

What's more, MAPAS It will host a market meeting in which 15 Latin American cultural markets, 5 Spanish markets and 8 representatives of other invited platforms participate. The Spanish Network of Auditoriums, Theaters, Circuits and Festivals of public ownership will hold an extraordinary meeting during the course of the market. To these activities is added the celebration of three round tables in which current issues related to the performing arts and music will be addressed.

The Delivery of the Illustrious Cartographer Award to Sylvie Durán, Minister of Culture and Youth of Costa Rica, with extensive experience in cultural management both from civil society and from public institutions, completes a program that, from Tenerife, is seriously committed to cultural internationalization.

Training is another of the strategic lines proposed by MAPAS as an essential element for the development of the musical and scenic industries, understanding that culture needs to have solvent structures that allow its growth and viability. For this reason, the market organization has given special importance to the educational field as an action that allows the consolidation, dissemination and expansion of artistic projects.

The training proposals of this second edition of MAPAS They began in March, with the organization of two free workshops aimed at organizations, music artists and performing arts, focused on promoting their projects, reinforcing their viability and opening channels of internationalization.

Already immersed in the week of celebration of MAPAS, Tomás Muhr and Marcelo Bones, two leading professionals in the performing arts and music, will reactivate the training program, with the organization of personalized tutorials that will be given on July 9 and 10 at the Guimerá Theater. These appointments are aimed at those registered in the business roundtable and 16 musical groups and 16 performing arts groups participate in them, which will already arrive with their confirmed appointment agendas and will be able to answer questions and receive specific guidance to face these meetings successfully.

On Wednesday, July 11, the training agenda continues with two master classes that will be given at the TEA Tenerife Espacio de las Artes Cilindro in sessions that begin at 9:30 and 12:00. Tomás Muhr will speak first about Management and circulation models in Latin America, aimed at musical projects, and Marcelo Bones will do so later around the Overview of internationalization within the framework of MAPAS, oriented to performing arts projects. Each one of them has a capacity limited to 25 people and they are aimed at any person or group that has an interest in attending, whether or not they are registered in MAPS. Registration for these conferences will be open until full capacity is reached through the MAPS website.

The objective of MAPAS is to promote the business culture for the live arts by making available to artists and programmers a space for the sale and purchase market as well as a series of effective management tools so that they can develop, consolidate and generate synergies in the sector. The training of agents, the active exchange of cultural products, the opening of markets and internationalization, the strengthening of networks and circuits, as well as the enhancement of the cultural event involving the Canarian population and its visitors are its main lines of action.

MAPAS has the collaboration of the City Council of Santa Cruz de Tenerife, the Government of the Canary Islands and various public and private institutions that can be consulted on the website. In addition, the market has the support of Acción Cultural Española (AC / E), through the Program for the Internationalization of Spanish Culture, through which this year four international programmers will be able to be present at MAPAS to get to know first-hand the creators and participate in the various activities that have been organized.