Companhia do Chapitô, Lornoar, Troker and Le Tarmac head the 19 performances this Friday on MAPS

The programming that MAPAS has prepared for this Friday, July 13, offers a total of 19 free shows on the stages of the capital of Tenerife, in which the public will be able to enjoy eight musical proposals, six dance, four theater and one circus from the 4:00 p.m. and until approximately midnight. This initiative is organized by the Cabildo –through its Tenerife 2030 strategy–, unahoramenos and Circulart.

The Portuguese Companhia do Chapitô They will occupy the Sala La Granja from 8:40 p.m. with their work Electra. This company always uses comedy for its power to question all aspects of physical and social reality. Since its founding in 1996, it has created multidisciplinary shows that are based on the physical work of the actor in a collective and constantly developing process, which invite the imagination of the public. Companhia do Chapitô has a total of 35 original creations that have been represented in more than 30 countries. 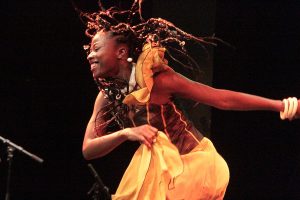 Lornoar arrives from Cameroon to perform in the Plaza del Auditorio de Tenerife at 7:10 p.m. and does so with a group of Canarian musicians formed for this performance that will accompany the powerful voice of this singer, songwriter and dancer who offers fused rhythms and a overwhelming stage presence.

The theater company Le Tarmac, from Burkina Faso, will present at the Guimerá Theater, starting at 5:30 p.m., his play Le Fabuleux destin d'Amadou Hampâte bâ. Le Tarmac pays tribute to the figure of Amadou Hampâte bâ, a Malian writer who did outstanding work in the field of the recovery and transmission of African culture and its manuscript archives, the result of half a century of research on oral traditions.

Mexicans will close the day Troker, with his show Imperfect, at 11:20 pm, in the Symphonic Hall of the Tenerife Auditorium. The band has created a sound that comes from jazz, funk, progressive rock and the popular mariachi tradition, giving it a refreshing air. Magazine Rolling stone considers them "one of the twenty Mexican artists who are breaking borders", while All About Jazz qualifies the band as "loud, shameless, chaotic, expressive ... all together is wonderful."

The circus comes from the hand of the Moroccans Colokolo Cirque Urbain Marocain, who will take their show to TEA Tenerife Espacio de las Artes Qahwa Noss Noss. Juggling, acrobatics and large doses of humor are the elements with which Colokolo parodies life in a Moroccan cafe. A narrative circus show in which the body speaks more eloquently than words.

In total eight hours of artistic proposals in which the Canarian creators have an important presence, with two dance shows, by Paula Quintana and Vane Lunática, and music, with ST Fusión, Timples and other small guitars in the world.

The program aimed exclusively at professionals tomorrow focuses its activity on the first day of the business conference, in which the 164 artistic groups will meet with the approximately 140 programmers who have come to MAPAS to try to close agreements for the distribution of shows in theaters and festivals in up to 40 countries.