Sanchis Sinisterra, Illustrious Cartographer 2022: "I am an illustrious lost man" 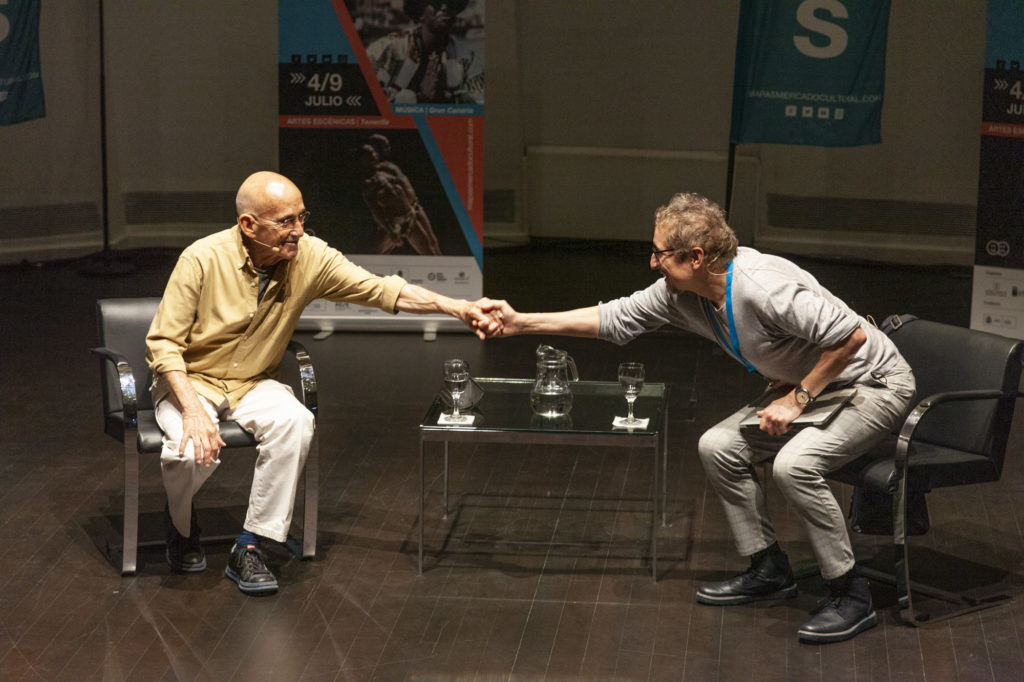 The theater director and playwright receives the Illustrious Cartographer Award 2022 in Santa Cruz de Tenerife, with which MAPAS Mercado honors his career, professional relationship and teaching with Latin America

The theater director and playwright José Sanchis Sinisterra (Valencia, 1940) received this Thursday, July 7, at the Tenerife Auditorium, the Illustrious Cartographer Award 2022 with which the fifth edition of the Market of the Performing Arts of the South Atlantic, MAPAS Market, pays tribute to a key figure in the renewal of the Spanish scene, who has also stood out for his pedagogical and teaching work, which is manifested in a continued relationship with Latin American theater. Sanchis Sinisterra is the master of a generation of authors and directors from the Latin world, the result of his first trips to Colombia, specifically to the Manizales Festival, which was his gateway to the continent and to a theatrical scene that helped direct him towards other horizons. . 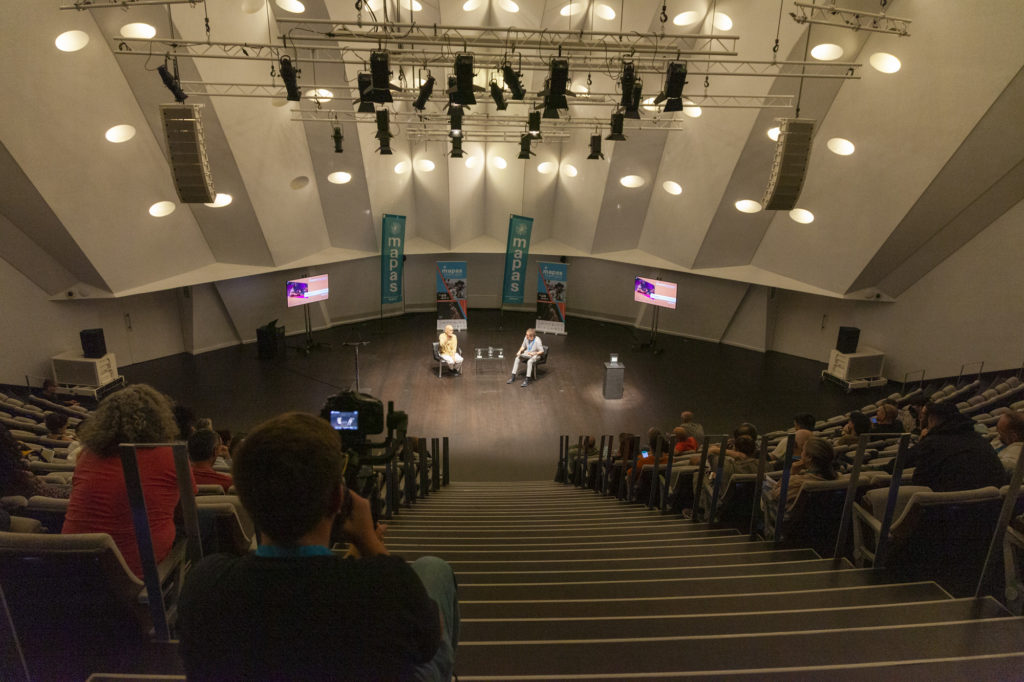 "I would say that I am rather an illustrious lost person," said the National Theater Award (1990) and National Dramatic Literature Award (2003) when recalling when they notified him of the award of this award. The director and playwright stressed that “my relationship with Latin America has been rather very chaotic, from one country to another, from an urban environment to a rural or peasant environment, but I imagine that it refers to another type of map, cartography , of interior itineraries that have constituted the axis of my life from 1985 to today”. Sanchis Sinisterra received the Illustrious Cartographer Award 2022 from Alejandro Krawietz, Island Director of Culture of the Cabildo de Tenerife; and Guacimara Medina, Minister of Culture of the Cabildo de Gran Canaria; and Octavio Arbeláez, artistic director of MAPAS Mercado.

Arbeláez introduced the honoree, highlighting his relationship with the Latin American scene, and how his teaching has contributed to forging a new body of playwriting since 1985, with his first appearance at the Manizales Festival, headed by Octavio Arbelaez, and the workshops of dramaturgy and direction that he did there, as well as the subsequent ones that he put together in the Beckett room, in Barcelona, aimed at professionals from Latin America. The honoree thanked MAPAS Mercado for this recognition while congratulating the cultural market organization for directing its gaze towards Latin America and the South Atlantic. "It is a necessary initiative because there is still a more northward-oriented vision in creation," said Sanchis Sinisterra.

The founder of the Fronterizo Theater and the New Fronterizo Theater had time to go into detail about that round trip with the theater as a traveling companion, before receiving the tribute from MAPAS Mercado. He spoke about Octavio Arbelaez and Luis Carlos Medina, who gave him the opportunity to “talk about dramaturgy, dramatic literature, because in Colombia and in other Latin American countries, collective creation had left text theater in a very marginal area. , we did a workshop in 1986, and that's where it all started: Mexico, Cuba, Chile, Venezuela”, highlighted Sanchis Sinisterra.

And he did it in a conversation with Fabio Rubiano, director of Teatro Petra, from Colombia. Latin America, as he recalled this Thursday at the Tenerife Auditorium, marked a before and after in his life. Of all this, of his life and work, of professional and personal hobbies, of major and minor works, of teachers and students, he spoke with Rubiano, and answered all the questions that the theater director, one of his students, asked him: “ Master Sanchis, of whom I had the opportunity to be a student on more than three occasions”, said Rubiano when introducing the Valencian playwright.

The disorder, the border

“Introducing the master and making a long list of his decorations and works would take the time for this tribute, and the theater can afford anything but boredom, and I will only say that of someone who at 17 decides to study philosophy to become related dramaturgy with the rest, with literature, with silence, returning to the classics”, summarized the director of Teatro Petra. According to Rubiano, Sanchis "is very closely related to disorder, to the border, to the new, to the altered, which is Latin America, to borders, to everything that is not fully defined."

"Fate has these jokes", Sanchis pointed out about a trip that led him "to the other side of the Ocean", and in which José Antonio Labordeta had a lot to do. "I met a very influential person in my life, a decisive person who somehow made me discover Latin American narrative," explained Sanchis Sinisterra. As he related, "I had read something, but through him I discovered the fantastic realism that broke with Hispanic narrative" There he found one of his teachers, "which was Julio Cortazar and his reading was important", until in 1985 " They invited us to the Manizales Theater to represent the play Ñaque or actor lice (1980), which was a somewhat emblematic work”.

Then would come other teachers and references who have been decisive in the career of Jose Sanchis Sinisterra, in his verb and dramatic pulse, such as Franz Kafka -"I always return to Kafka", he said-, Bertold Bretch, Samuel Beckett or Harold Pinter. And it is that Sanchis Sinisterra, in the words of Rubiano, is "a reader who bewitches with his voice, some of us have had the opportunity to hear his voice in the texts of others and he falls in love with the audience, he reads and makes us live and understand the sound of the theater". Concepts such as experimental, new, search, method and research, "are part of their usual practice," said Rubiano. As the honoree concluded, "you only have what you share", a maxim that gives meaning to his life and work.

The tribute to José Sanchis Sinisterra is the act with which the Mercado de las Artes Performativas del Atlántico Sur, MAPAS Mercado, opens its program in Santa Cruz de Tenerife, which will be held until next Saturday, July 9, with the focus on the arts scenic between the business roundtables starring artists, companies and programmers; and thirteen theater and dance performances in leading scenic spaces in the capital of Tenerife. MAPAS Mercado is organized by the Government of the Canary Islands, the Cabildo de Tenerife, the Cabildo de Gran Canaria, Unahoramenos Producciones SL and Circulart, in collaboration with the municipalities of Las Palmas de Gran Canaria, Santa Cruz de Tenerife, Arucas and Agaete. 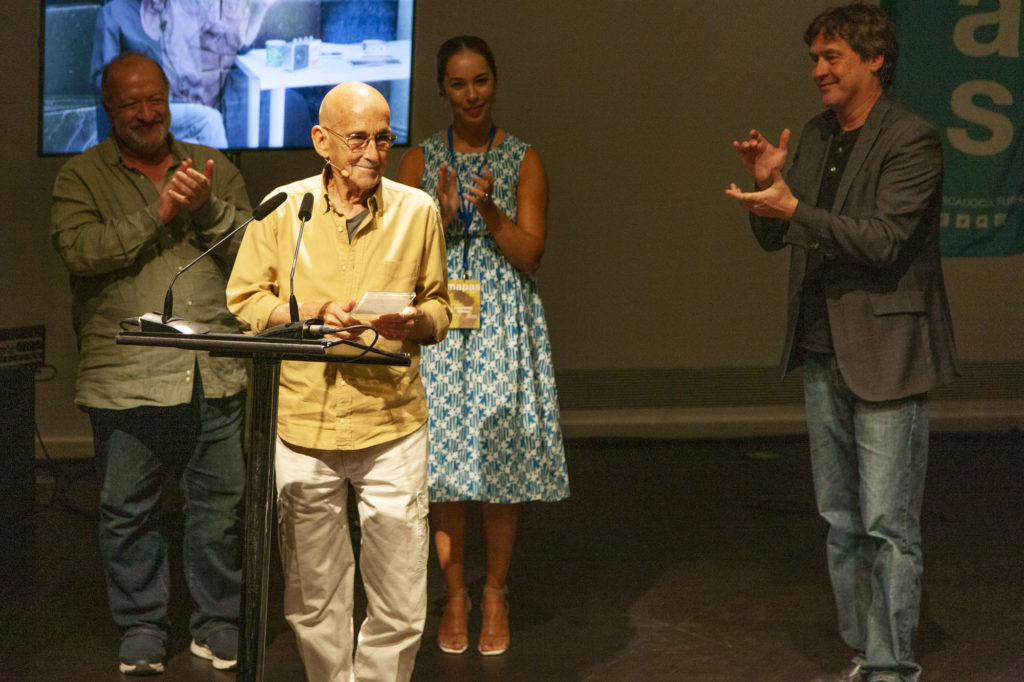