Octavio Arbeláez: “What we have to do as artists is locate ourselves in the industry and learn about the prospects for circulation and production” 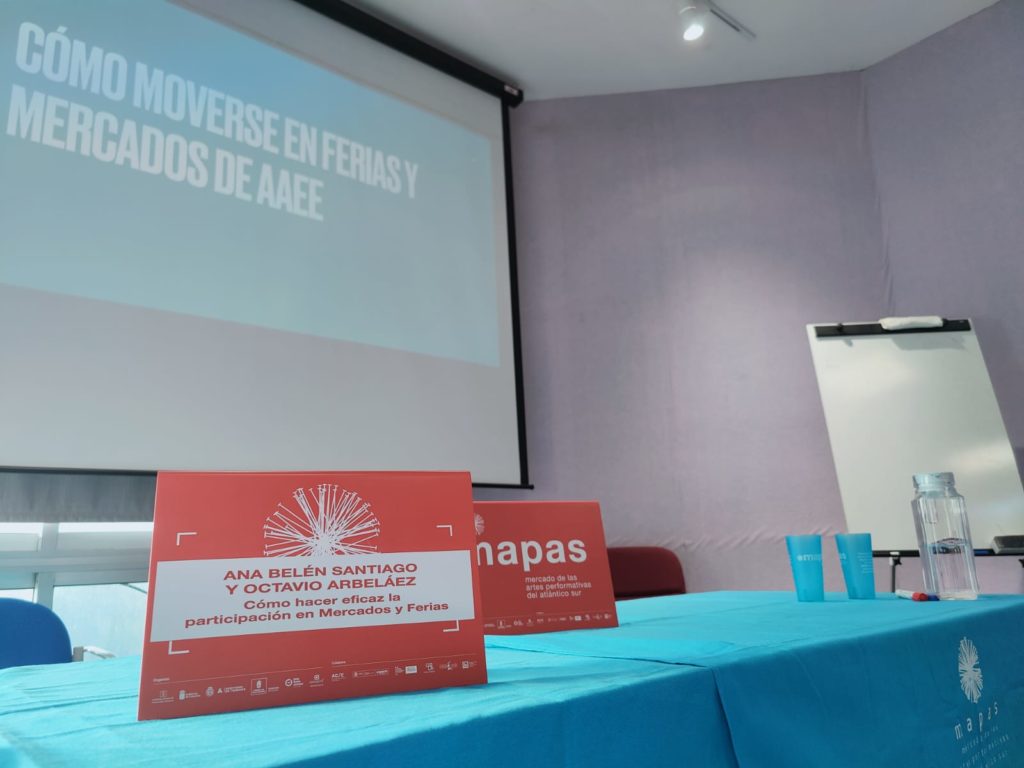 Together with Ana Belén Santiago, the artistic director of MAPAS discovers the tools for creators to take advantage of business opportunities in markets and fairs

«You have to control expectations and be less short-sighted; it is not about making a work and seeing how I place it”, highlights Santiago in his speech at Campus MAPAS

“In the performing arts and in music we all have an aspirational ego that makes us think that probably what we need is to be discovered, and it turns out that what we have to do is locate ourselves in the industry and know what perspectives we have from the point of view of the circulation and production of our shows”. This is the reflection of Octavio Arbeláez, artistic director of the Mercado de las Artes Performativas del Atlántico Sur, MAPAS, which is held between July 4 and 9 in Gran Canaria and Tenerife, in his speech at the workshop How to participate effectively in markets and fairs. An event that is part of the Campus MAPAS training offer, which takes place this Thursday, June 9, in the Joséfina de la Torre room, in the Cuyás Theater in Las Palmas de Gran Canaria, and on Friday 10 in the Pérez Minik Room, at Espacio La Granja, in Santa Cruz de Tenerife, from 9:00 a.m. to 1:00 p.m. A workshop for two voices in which Ana Belén Santiago, artistic director of Teatro del Barrio, in Madrid, and coordinator of the Euro-Latin American Network of Performing Arts (Redelae), also participates.

The objective of this informative meeting is "to provide a context for people to take advantage of the opportunities that arise, but both in MAPAS and in the Ibero-American markets", explains Octavio Arbeláez. “We are going to offer a context of the situation so that artists can really take advantage of the spaces that are being provided through MAPAS, and access not only the contacts and possibilities that we offer, but also relevant information that will allow them to take advantage of these moments of networking or meeting spaces, and can project their proposals in different areas. It is very important that they know that the spheres [of action] are not only global but also regional, local, on the islands, in the country, and that people can really locate their proposal and know that they have to think about their place in the world," he stresses.

In the opinion of the artistic director of MAPAS, the end of the pandemic and the reactivation of cultural and social activity on all fronts outline a scenario in which “new challenges” appear, before which cultural actors must rise to the occasion. "These are new times, without a doubt - highlights Octavio Arbeláez - and we have to contribute to the reactivation by generating these platforms so that the Canarian, Ibero-American and African offer can circulate on the world circuits and scenes". In addition, Octavio Arbeláez considers it necessary to convey "a message of optimism because we have returned to normality, we can once again believe that the messages transmitted from art and culture make a world of the impossible possible."

For her part, and in this context of fairs and markets, Ana Belén Santiago, with the endorsement of her experience as a theatrical producer and her work at the head of the artistic direction of the Teatro del Barrio, in Madrid, and in the Euro-Latin American Network of Performing Arts, Redelae, warns that it is necessary to "equip professionals with tools" because "a fair, a market, is a very hostile territory in which other factors come into play". In his opinion, there is an erroneous "hierarchical relationship" where "those responsible for programming have the power to choose, and the companies, artists and distribution managers are there for what they hunt, and my premise is different, to bet on a horizontal chain in which one and the other are needed”, emphasizes Santiago.

In the workshop that he shares with Octavio Arbeláez “my will is to give ideas and tools to companies so that this situation is balanced, and that they are able to identify their values to contribute to a cultural project that is supposed to have a public mandate, or publicly financed, to generate democratic access to culture”. Ana Belén Santiago points out that “stage production is a collective work by definition, and it is very isolated by unions: each part of the chain thinks that it is in the worst situation without seeing the whole. You have to keep in mind that that programming person you are chasing, to whom you write a WhatsApp, has a tremendous saturation level, since he is not only in charge of programming.”

In this sense, the expert advises professionals "to control expectations, we must be less short-sighted, since it is not about doing a work and seeing how I place it." Pressure and urgencies are bad traveling companions in the performing arts and music. Ana Belén Santiago explains: “There is a desire to professionalize or maintain your profession in this, and I think it is wrong to generate that pressure that gives an erroneous reading of success/failure, and what you have to generate are relationships. Not so level networking, but relationships of trust, that a hiring person knows that you exist, that you are working, how you evolve and see what issues you are dealing with. Maybe now he is not interested in this show but since it is a very mobile sector: now you are working producing theater and at the same time directing a festival, and that company you met makes sense”.

After the collapse brought about by the pandemic, "now there are many more shows than capacity, I'm not saying to hire them, but to call on audiences." A business opportunity that must be worked with certain guidelines that are offered in this session of Campus MAPAS. "The time we live in gives us clues about the values of the projects, such as mental health that is on the agenda, even if it is a problem of society." With this premise and based on the fact that “artists, due to their need to create, are usually responding to what is happening in the world, suddenly the topic you deal with can also be a powerful sales tool”. And from this point "you can get a social repercussion that has not had and without having to take into account a stellar cast, for example, and if you address a topic that is on the media agenda, you can still get, not fill the capacity, but if you achieve an unthinkable promotion and publicity”, concludes Ana Belén Santiago.

The sessions of Campus MAPS continue on June 16 and 17 with Pepe Zapata, who will give the talk Digital marketing and new platforms; and on June 30 and July 1, Patricia Carrera will speak about Music synchronisation. The public and professionals interested in participating in this workshop and the next ones that form the backbone of Campus MAPAS's training offer can formalize their registration through the form on the platform www.mapasmercadocultural.com.