Nemian Danza Escénica, Vaca 35 Teatro and Ëda stand out in the MAPAS 2019 programming for this weekend 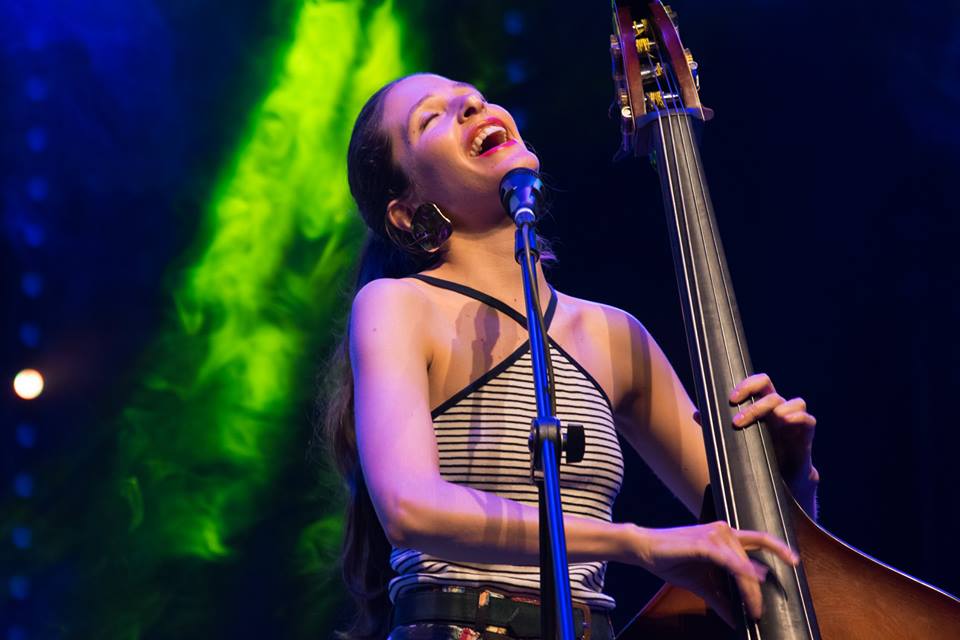 MAPS 2019 says goodbye with a weekend full of music, dance and theater. Twenty-two performances with artists from eleven countries will offer the closing of this third edition of the South Atlantic Performative Arts Market. Among the most outstanding artistic samples that can be enjoyed this Saturday are Nemian Danza Escénica (Mexico), at 5:00 p.m. in the Symphonic Hall of the Tenerife Auditorium, Vaca 35 Group Theater, in the unique space, also in the Auditorium, from 9:45 p.m., and the Colombian Ëda, who will offer a concert at 6:30 p.m. in the Sala de Cámara.

Also on saturday MAPS 2019 will offer two very attractive performances. The daring and irreverent street proposal of Hortzmuga Teatroa, Femmes, starting at 7:00 p.m., in Calle del Castillo (area near Plaza de la Candelaria) and an unprecedented collaboration between Colombians Dangerous Crew and Smockey & The Agama Band (Burkina Faso), which will close the night, at 11:50 p.m., with a joint performance of hip-hop and rap in the Sala Sinfónica del Auditorio de Tenerife.

The theatrical programming will begin at La Granja Espacio de Promoción with a work of fiction and non-fiction that places the viewer in an emotional and intellectual moment prior to the revolutionary outbreak. Before the Revolution comes from the hand of the Egyptians Temple Independent Theater Company. Then, at 9:45 p.m., the Uruguayans Kashmir Producer they will invite us to cross artistic and political borders with the piece Rolled dice, an innovative scenic reflection on rock.

The Guimerá Theater will host at 5:40 p.m. Faust project, from Delirium Theater. With a committed and thoughtful text, the work stars "the other victims" of the disappearance in 1968 of the fishing boat Fausto between El Hierro and La Palma: the families of the three fishermen and the passenger on board. From Algeria he arrives at that stage later Compagnie La Chouette blanche with a story also of female voices: Amer, a journey through memory performed by a single actress, at 11:15 pm.

Micomicón Theater is the company chosen to represent at 8:15 p.m. at the IES Alcalde Bernabé Rodríguez A humble proposal. It brings to the present the daring satirical essay by Jonathan Swift, a monologue that will seek the viewer's senses through humor and social criticism.

As for dance, Saturday's programming is characterized by pieces of a great aesthetic, scenic and thematic variety. The performances will take place in the Sala Castillo of the Auditorio de Tenerife What about Dante from Mounir Saeed / Cramp Group (Egypt) and Fatou t'as tout fait, from Fatoumata Bagayoko - Cie Jiriladon (Mali). In the Symphonic Hall the presentation of The fall into the void, in charge of the Mexican company Nemian Stage Dance and in the Plaza Castillo Lava he will stage the piece by Paloma Hurtado 15º to the West.

The music of MAPS 2019 will begin to sound in the Auditorio de Tenerife at 5:40 p.m. in the Sala de Cámara, where Lívia Nestrovski & Fred Ferreira will interpret Duo, a subtle and welcoming experimental proposal for guitar and voice. Later, at 7:20 p.m., the Tenerife trumpeter Nathanael Ramos will present his album Islander's Dilemma and the mexicans The Garfield They will take the Plaza Castillo at 20:05 hours to bring Everything rich. Owners of their own fresh and forceful sound, they have three full-length albums.

Barreiro Project (Canarias) will continue to put the music on the Plaza Castillo stage with Good vibes, a mixture of styles that takes the public to a sound ocean of original music but with a flavor of jazz, black music, hip-hop, soul and R&B. At its end, around 9:45 p.m., the square will receive the Tunisian composer King abid, which will present an unpublished work recorded in Studio 12. Mix of pop with a Tunisian flavor, rap and reggae for festive moments.

From Burkina Faso, Smockey & the Agama Band will take to the Symphonic Hall their latest album, entitled Prévolution, a synthesis of three concepts: premonition, revolution and evolution. This live music band that practices Afro rap with politically and socially committed lyrics will perform at 10:30 p.m. Behind them, Dangerous Crew they will put the Colombian character on stage with their artistic proposal Pacemaker.

At the end of the artistic exhibitions, starting at 0:00, there will be a closing party of MAPS 2019 in the hall of the Auditorio de Tenerife, with the performance of Dj kali, which will propose a stimulating and intense journey through the sounds and danceable rhythms of the world. Admission to these parties is also free and free until full capacity is reached.

On Sunday, the last day of this third edition, the artistic exhibitions will give the opportunity to know, one more year, the work carried out by Dance in Community, a social project of Auditorio de Tenerife that will share with the audience the piece Townhouses in Plaza Castillo, from 11:15 am. Humor, this time starring the comedian Yiyolo strattro, will dismiss the programming of MAPAS 2019 on the same stage. The Comedy Show, a show for all audiences that will be a unique opportunity to enjoy the magic of the clown.

The program of performances and showcases It can be consulted on the web and in the free app that can be downloaded for mobile phones, IOS and Android, and access all the information on artistic exhibitions and conferences by MAPAS. Through this application, notifications of interest to the public and market participants will also be sent.

MAPAS is an initiative organized by the Cabildo de Tenerife, Circulart y unahoramenos, which is sponsored by the Government of the Canary Islands, the Santa Cruz de Tenerife City Council and the INAEM, in addition to the support of Acción Cultural Española (AC / E) to through its Program for the Internationalization of Spanish Culture (PICE) in the form of Visitors, which favors the participation in the Market of a dozen professionals of the performing arts from Africa and Latin America. Casa África, the Ibero-American General Secretariat, the SGAE Foundation, Iberia and Hyundai, among other public and private institutions, also collaborate.