Mercè Puy: "My obsession is the professionalization of the sector and that people can live from their work" 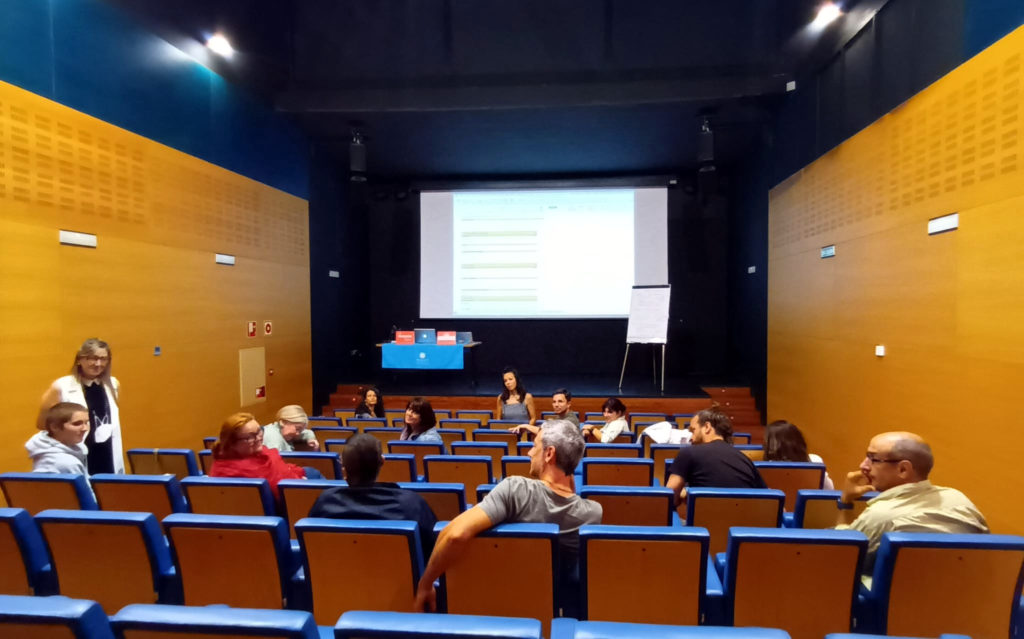 "The level of Canarian musicians is spectacular and in the performing arts the same, and what I think is missing are bridges, toll-free highways that professionals can use," says the expert in her workshop at Campus MAPAS

The main problem facing the performing arts sector in Spain is that "there is a lack of professionalization", that "companies and venues have the tools to make projects viable, because it is no use having a brutal project at an artistic level and that the numbers do not come out and you have to leave it ”. It is the reflection of Mercè Puy, executive producer and director of Performing Arts at Terrat©, and specialist in the production and distribution of performing arts and music shows, in the workshop Management and administration of performing arts companies and venues, which is held in the Josefina de la Torre room, in the Cuyás Theatre, in the capital of Gran Canaria, as part of the Campus MAPAS programme. It is the third of the workshops that are taught within the training offer of the fifth edition of the Mercado de las Artes Performativas del Atlántico Sur, MAPAS, which will take place between June 4 and 9 in Gran Canaria and Tenerife.

"My obsession is the professionalization of the sector and that people can live from their work," says Mercè Puy, who has extensive experience as an executive and artistic producer and as a performing arts production teacher. As he explains, “I dedicate myself to providing these tools, I have been in the profession for 30 years and I share it with professionals”. Specifically, it refers to tools such as the economic viability and artistic profitability of each project. The also partner of Vania Producciones values positively the effort of MAPAS to open this training window and to facilitate the opening of markets in its business rounds. All this, for the sake of the professionalization of a sector, which in his opinion, "is in the process of approaching the Anglo-Saxon world, which is well organized and where the show business It is part of the country's GDP. The workshop, which is also being held on Friday, May 27, in the Pérez Minik Room, in the Espacio La Granja, in Santa Cruz de Tenerife, is “a very practical seminar and I focus on solving problems when making these projects viable” , point.

“Our sector is absolutely vocational”, emphasizes Mercé Puy, because “you go on doing things and you don't ask yourself other questions: you make a premiere and then you can't go on tour with what you kill off part of the recovery and financing”. With regard to the Canary Islands, its insularity is an added factor, and in his opinion, "there are artists of extreme quality, very interesting projects, and the institutions are indebted to the Canary Islands, I always claim it, because if I want to come with My productions to the Islands cost me twice as much, and although there is help, they come out once a year”. And although from the Canarian Government this situation is alleviated "much more work must be done". In his opinion, "the level of Canarian musicians is spectacular and in performing arts the same, and what I think is missing are those bridges, highways without tolls, that professionals can use".

The vocational motivation that presides over creation must go hand in hand with professionalization. "Because there is a motivation, sometimes we forget that it is still a business, that we want it to work and be viable," says Puy. In this regard, the expert warns that “the conception that the performing arts are not a viable business in economic terms is not true; there are business models that work very well, and that is what we have to try: provide these tools in the three phases of production so that in the last phase, which is amortization, because the important thing is not to lose money”.

"If they come out of this workshop with three or four tools to solve their problems, I'm already happy, because sometimes we forget about those other phases of the process, the grants, the tour..., we see it at the end when we should see it at the beginning. ”, says the executive producer and director of Performing Arts at Terrat©. The business roundtables are other options for positioning the project, just as it works in MAPAS, following the Latin American model that “works very well”. In the opinion of Mercè Puy, "out of every ten projects, eight do not work, and it will be necessary to see why this situation occurs and what are the tools available to professionals". The market has changed on all fronts, in a context of a pandemic that "has done us a lot of damage but has taught us to open up other paths, for example, the streaming, which is another way of making projects viable, theater or concerts are held in streaming paid and they work. And the big theaters or live music venues are doing it, which raise even more than the face-to-face functions”.