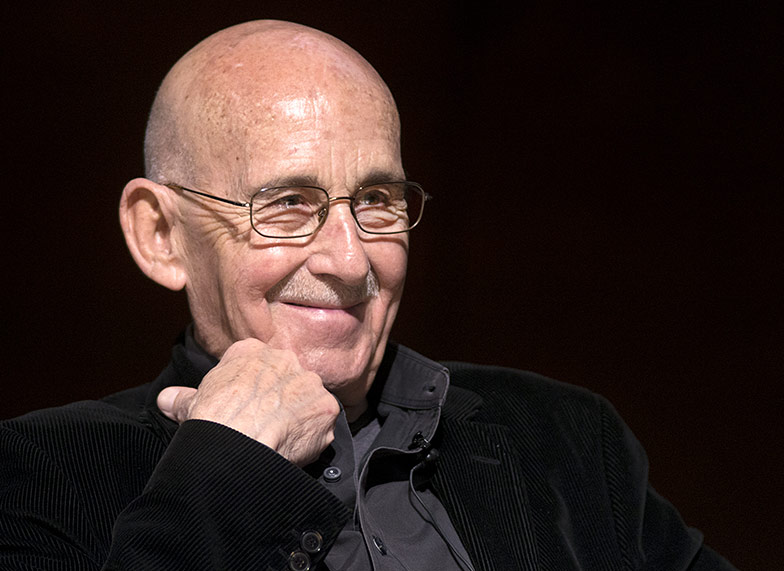 Sanchis Sinisterra: "In my life there is a before and after my contact with Latin America"

"I have always been a defender of the dual nature of theatre, theater is literature and it is entertainment, and one thing does not invalidate the other," says the director and playwright, whom the fifth edition of MAPAS Mercado honors with the Distinguished Cartographer Award

Playwright and theater director Jose Sanchis Sinisterra (Valencia, June 28, 1940) receives this Thursday, July 7, at the Adán Martín Auditorium of Tenerife, the reward Illustrious Cartographer 2022 that gives you the South Atlantic Performing Arts Market, MAPAS. An acknowledgment and tribute to the professional career of the author of more than 50 plays, who has become one of the great innovators of the scene, and whose work has marked and trained generations of playwrights, authors and directors. Sanchis Sinisterra will hold a conversation open to the public, at 12:00 noon, with Fabio Rubiano, director of Teatro Petra, to subsequently receive, at 1:00 pm, the tribute from MAPAS Mercado.

MAPAS Mercado in its fifth edition distinguishes it this year with the Distinguished Cartographer award. What do you think of this recognition?
The truth is that I was very surprised because I was not aware of the existence of this award, and in principle one takes it literally, and I thought, but if I always get lost, I am a disaster for the maps [laughs]! I was surprised by the award until I found out that MAPAS was behind it, which is a project I've heard about but didn't have much information about, and the truth is I've felt very intimidated by the nature of the award.

His professional career is closely linked to Latin America, and specifically to the Manizales Festival, in Colombia. In 1985 he began a fruitful professional and teaching relationship that he maintains. What can you tell me about those years and how it all started?
There is one thing and this is true, and I often say this when the question is raised, and that is that in my life there is a before and after of my real, concrete and specific contacts with Latin America. Before, I had had a certain fascination for the Latin American world at university, I was very interested in the devastation of pre-Columbian cultures by the Spanish conquerors, it was a subject that had an impact on me. Then and from my friendship with José Antonio Labordeta, poet, writer and later politician, with whom I met at the High School of Teruel, he opened the doors for me a little and made me discover part of the Latin American narrative. At that time I was very Frenchified, very impregnated with European culture, with Bertold Brecht, and through Labordeta that impressive landscape of narrators unfolded for me. So I had a kind of predisposition. When the Manizales Festival, Octavio Arbeláez invited us to the Fronterizo Theater with the play Ñaque or lice and actorsI crossed the ocean and landed in Colombia, I went to Medellin and it was an impact that has not ceased to occur. It is true that from that moment it became a kind of horizon, I would almost say, necessary: travel to Latin America, learn about Latin American theater and make friends, and participate in the maximum of experiences as a bridge with Spain.

Colombia was the gateway to the continent and the beginning of a professional relationship that continues to this day.
There is a specific detail that I would like to highlight as a kind of personal tribute to my first Latin American brother, and that is precisely during that stay in Manizales, which was a festival that then brought together the best of Latin American theater, and that allowed me see shows by groups and companies that I didn't know, but Octavio Arbeláez also asked me to do a small playwriting workshop, three or four mornings, at the end one of the participants, Luis Carlos Medina, from Medellín, approached me and explained to me that He was a professor at the Faculty of Arts at the University of Antioquia, in Medellín, and I talked about dramaturgy, text, dramatic writing, and he told me that in Colombia and in other Latin countries, at that time, text theater practically had been relegated to a kind of mist of the past, since collective creation, which also had its diffusion focus in Colombia itself, had banished text theater, and that I went to Medellín to make this kind of vindication of the text. It was a bit of Luis Carlos Medina's proposal that led me the following year, in 1986, to travel to Medellin and do a workshop where I combined the dramaturgy of narrative texts with textual dramaturgy, and that's where it all began, my discovery of Latin America.

His role in this case was a shock to recover and vindicate text theater.
I like to think that I contributed something to this revaluation of text theater, which was also being undervalued in Spain. I have always been a defender of the double nature of theater, theater is literature and it is spectacle, and one thing does not invalidate the other.

In Barcelona, in the Sala Beckett dramaturgy workshops were held for Latin American theater professionals that led to the formation of a new generation of playwrights.
That was a very magical circumstance. In 1989 and as a consequence of my contacts with Latin American theater and my appreciation of the enormous value of many groups in adverse contexts, which opened theaters there, promoted initiatives, when I returned to Spain from a semester spent in Medellin, I think I had already gone to Cuba, to Mexico too, I made the decision to open that space, the Beckett room, and one of its first objectives was to establish a bridge with Latin America. The opportunity came in 1992 with the festivities of the fifth centenary, which seemed to me a good occasion to ask the institutions for help, and then we effectively organized a creation and production workshop for Latin American theater artists in Barcelona. Theater people came for a month, and it was an extraordinary experience, which continued for a few more years. That's because it was the time of the fat cows and there was a willingness to build bridges on the part of the administration. The selection of these first workshop participants was a series of people who had known or had a reference, and the following year we were able to make a formal call. The opportunity had to be seized. At that time there was no Internet, or at least it did not have the total presence that it had later, which was an interesting dimension because the Latin American workshop participants themselves did not have information about what was happening in other countries of the continent, with which this coexistence in Barcelona served to create ties between actors, directors, directors, authors and authors from various Latin American countries that until then had no reciprocal information.

The Border Theater served to give life to many of your texts, through the New Border Theater you continue to feed the vocation of working with Latin America, what are your plans for the future?
Two things. One positive and one negative. The positive is that in 2011 or 2102, just after the Nuevo Teatro Fronterizo opened in Madrid, here in Lavapiés, we connected with a group of scholars of Latin American theater who were doing a master's degree at the Carlos III University. And then through contacts, especially a Mexican director, Gema Aparicio, we organized, she was really the one who coordinated it, a cycle of dramatized readings of works from the countries from which there were students in the master's degree. It was very interesting because one of the activities that continued was that cycle of theater readings. From then on, we have continued, as far as possible, emphasizing the Latin American theme. The problem is that we are currently in a tremendous crisis, what's more, I can announce that the (Frontier) Theater is going to close and we are preparing a way to close the project, although attempts are appearing to revive it in the fall, but for now we are in phase, we would say terminal. The institutions have not moved a finger at the moment and it is a pity that the project, which has survived the beginning of the pandemic, had to leave the premises because it was small and did not meet the sanitary conditions, but little by little the strangulation of the situation economic situation and the actual dispute over face-to-face attendance has been suffocating us.