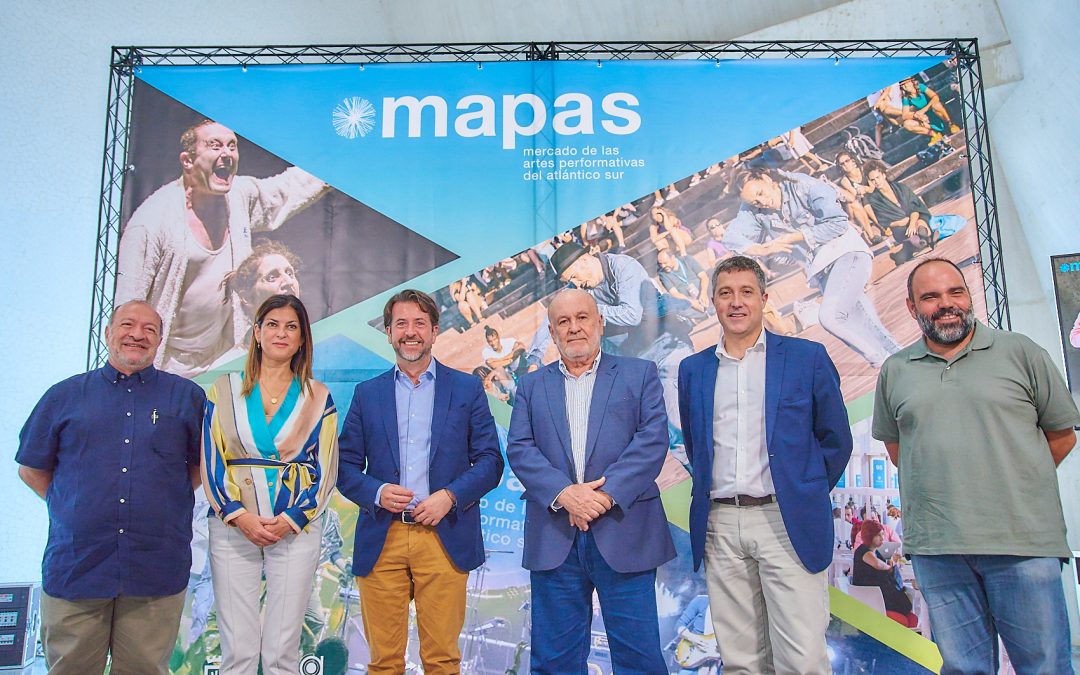 This festival of culture and performing arts was presented today at a press conference by the president of the Cabildo, Carlos Alonso; the island’s Director of Culture and Education, José Luis Rivero; the acting Vice-Counsellor of Culture of the Canary Islands Government, Aurelio González; Santa Cruz de Tenerife mayoral candidate Matilde Zambudio; the director of Circulart, Octavio Arbeláez; and the director of unahoramenos, Mario Vega.

Alonso highlighted “three things” about MAPAS. Firstly, “the audiences, which have responded very positively since the first edition, and which have grown and ensured that this market continues to take place due to the warm welcome they have extended to the participants”. Secondly, “the fact that it positions productions from the islands on the world stage, in an open, diverse and global environment”. Finally, he praised the growth of the festival, which has allowed the incorporation of representation agencies for the first time this year “as an important element giving MAPAS even greater strength”, as well as the increase in “participation rates from other parts of the world”.

In his speech, José Luis Rivero emphasised that MAPAS “has consolidated its position as a platform for Canarian performing arts around the world and as a platform for performing arts from around the world in the Canary Islands”. “The tri-continental confluence is brought to life in Tenerife”, he added. He also noted the significant returns on investment at the last edition of the event: around 5 million euros, with an average exceeding 1,000 euros per visitor and 300 euros per Canarian resident.

The director of unahoramenos, Mario Vega, presented the programme for MAPAS, which will be held over five days at various venues in the capital of Tenerife, emphasising the particular importance accorded to “sustainability and practices which reduce as far as possible the environmental impact on the city” in this edition.

Octavio Arbeláez noted that “Tenerife is a very special gathering place” for MAPAS. He added that the market is a project which “shows the world that we are creating on the basis of diversity” and that this third edition is “very special” because it prioritises networking and strategies for collaborative work.

Matilde Zambudio emphasised that Santa Cruz de Tenerife is “the narrative thread running through MAPAS, and this third edition offers a new opportunity to take our culture to international markets”. The acting Vice-Counsellor of Culture of the Canary Islands Government, Aurelio González, said that “MAPAS is a project based on creativity” and that more “motivating encounters which help to foment creativity” are required.

The figures for MAPAS 2019, organised by the Cabildo de Tenerife, unahoramenos and Circulart, are once again very positive, with high participation rates: 138 artistic and musical groups from 27 countries, 30 artistic representation agencies and 149 programmers and cultural agents with 40 different nationalities.

The professional market, which will feature business meetings, academic activities, meetings of institutions and international organisations, and artistic performances open to the public, will occupy the main cultural venues in the capital of Tenerife for five days, offering a lively programme in which the formation of cooperation networks and collaborative work play a central role.

The programme of performances and showcases may be consulted on the website and on the free app which can be downloaded for IOS and Android mobiles, where visitors can find detailed information about the performances and lectures organised. The application also offers notifications providing information of interest to the audience and participants in the Market.

The 138 artistic groups and 30 representation agencies will be able to meet with almost 150 programmers and cultural agents in order to find business and distribution opportunities for their artistic proposals and formalise agreements for future collaboration. The business networking event will be held at TEA Tenerife Espacio de las Artes on Friday 12th and Saturday 13th July from 10:00 to 14:00. These brief meetings, each lasting 12 minutes, will allow the artists to show their creations to programmers from 40 different countries. At the last edition of MAPAS, around 3,500 professional meetings were scheduled, giving rise to numerous subsequent agreements.

In the show, the six dancers will bring to life a pure, profound geography of water amid sediment and air, shade, calm, unimaginable fauna, a place unfit for habitation. Daniel Abreu explains in his description of the show that “love is what drives the world and every one of the actions of these six dancers reflects this. I cannot conceive of dance without love… In my imagination, it carries me into the blue depths of the sea, to the beautiful creatures and expanses of obsidian sediment and other volcanic residues”.

MAPAS will also pay tribute to its Cartógrafo Ilustre of 2019, awarding the prize to Hassane Kouyaté (Burkina Faso, 1964), a griot, actor, percussionist, stage director and key ambassador of African culture, who has demonstrated that the distance imposed by oceans and borders are nothing when it comes to sharing art. Kouyaté possesses extensive training and experience, and has attained great prestige throughout his career. He has played a central role in producing geographical maps of culture. The shows performed by this figurehead of the performing arts, with their social and creative engagement, have moved audiences in Burkina Faso, Ivory Coast, Niger, Mali, Senegal, Togo, Guinea, Congo, Morocco, Algeria, Tunisia, Venezuela, Mexico, Brazil, Reunion, Canada, the United States, Switzerland, France, Belgium, Spain, Austria, Germany and Cuba.

The Performing Arts Market of the South Atlantic will also feature an extensive professional and academic programme, with lectures by Sylvie Durán, minister of Culture and Youth of Costa Rica, who will talk about networking, and Daniela Bosé, a lecturer and professional who will present her perspective on the role of women in the music industry. Interesting debates will also be held, considering the advantages of cooperation in the cultural sector and the performance of women in the Ibero-American performing arts.

One of the most eagerly awaited panel discussions will be the Battle Debate featuring artists and social activists Serge Smockey Bambara and Henry Arteaga, known as El Jke, which will be moderated by journalist Nicolás Castellano. The two musicians will also participate in the programme for MAPAS 2019, performing on Saturday 13th July. Bambara is a member of Smockey & The Agama Band, an Afro rap band from Burkina Faso with politically and socially engaged lyrics. He was also one of the founders of the Civic Broom movement which played a key role in the fall of the dictator Blaise Compaore. Henry Arteaga El Jke is a member of the Colombian Crew Peligrosos, a band which has attracted a loyal audience due to their professionalism and performance on stage.  They are also renowned for their use of art in social construction.

MAPAS, a platform for international connections

The third edition of MAPAS positions the festival as an international benchmark in the cultural and creative industries and as an international meeting point for the performing arts.
In this context, a Network Meeting has been organised to bring representatives of institutions and organisations promoting music and the performing arts around the world together in Tenerife.

With a focus on rigorous, professional analysis and debate, associations and organisations which form part of the business fabric of the performing arts sector all over the world – such as the Association for the Development of the Iberoamerican Music Industry (ADIMI), Global Music Market Network (GLOMNET), the Iberoamerican General Secretariat (SEGIB), the Euro-Latin-American Network of Performing Arts (REDELAE), the Spanish Network of Theatres and Auditoriums (REDESCENA) and Satélite Lat – Women in the Latin American Music Industry, among others – will participate in the Network Meeting to work to boost culture, transport artistic endeavours to the international level and consolidate the creative industries through proposals based on innovation and consensus.

As part of this exploration of collaborative working networks, MAPAS will also host an assembly of the Euro-Latin-American Network of Performing Arts (REDELAE). The Canary Islands will be represented by Réplica, the Association of Performing Arts Companies in the Canary Islands, and Pie de Base, the Canarian Association of Performance Artists. Both organisations will take advantage of the setting offered by MAPAS to hold their respective members’ assemblies and establish collaboration networks with any agents interested in joining them.